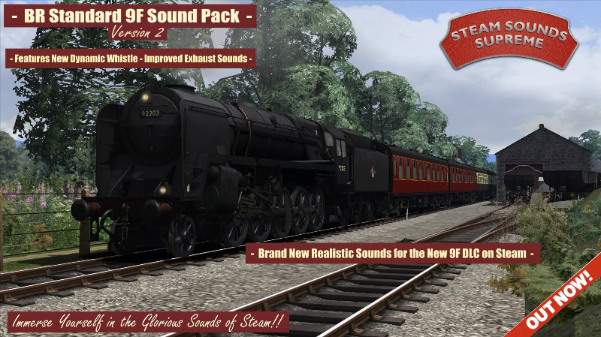 A full and realistic set of sounds giving you all the sounds you would want to hear from a big locomotive like a BR Standard 9F*, including: 3-part exhaust sounds including pilot and main valve; the shrill of a BR Standard whistle; Valve and motion sounds; coasting sounds; extra cab sounds and much more. Both the double-chimney and single-chimney versions have been modified by the pack. You'll notice subtle differences between the sound of the two types.

**Version 2** - The sounds have been improved for version 2. A better set of double-chimney 9F exhaust sounds have been obtained, and put to good use. We have also managed to locate a suitable sound loop for higher speed exhaust sounds. We also put in our 'Dynamic Whistle' - as seen on Facebook. This enables you to play with the whistle and vary the sound according to the position of the whistle handle. To achieve the effect however, in-cab use is required.

We have included a scenario to give you a gentle demonstration of the sounds in action. The scenario takes place on the East Somerset Railway, where you drive 92203 Black Prince(without nameplates) on it's final day in traffic on the ESR, before moving on to pastures new.You handle the first round trip of the day and get to hear
all the new sounds as you do so.

PLEASE NOTE: You MUST have the Standard 9F Pack DLC from Steam to use this pack. This is NOT compatible with any other 9F released by any other developer.